The Wanderer is the 5th chapter of Psychteria Volume 1. It debuted in March 2015.

Cali wakes up to find her wounds patched, and after some argument she agrees to let Krubby stay. However, a mysterious stranger appears and puts Cali on full alert.

Cali begins to awaken, confused as to what happened. However, she notices her disguise has fallen, prompting her to immediately expend energy to restore it. Just as she finishes, however, Krubby appears to tell her not to move. Cali immediately questions Krubby's presence, but Zage comments on how Cali should thank Krubby for patching her wounds up.

Angered, Cali begins to criticize Zage for allowing a stranger in, but Zage snaps back that she's only alive because of them. Cali attempts to argue back, but suddenly notices her shirt is missing. Krubby attempts to explain it was to patch her wounds, but Cali demands her shirt back and dresses herself. As she does so, she accuses the pair of ogling her and casually suggests shooting them, angering Zage and making Krubby flustered. After commenting on her own flat chested nature, Cali calms and merely comments that she doesn't trust anyone.

With the argument finished, Cali comments Krubby can stay because he looks pathetic. She then shoos Zage and Krubby away so she can rest. Krubby comments about Cali's attitude, and Zage explains how he's known her only a short time but that she saved his life. Krubby concludes optimistically they can make her mellow out.

Hours later, a mysterious white haired youth is passing through the forest when he spots Cali's house. He decides to peek through the window curiously. At that very moment, Cali awakens from a nightmare, only to see the mysterious boy through the window. Furious, Cali immediately runs outside after him as the boy tries to flee. The boy calmly tells her she should be resting because of her injuries, and further embarrasses Cali by pointing out her bandages are obvious. Cali attempts to question the boy, but the boy continues to insist he was only passing through and once again tries to leave. Suspicious even still, Cali summons a shadow arm and trips the boy before attempting to pounce on him. The boy easily dodges out of the way and becomes increasingly frustrated with Cali's insistence to pursue him. 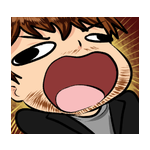