A medium-range rough voice, with a sense of authority in it.

Tai is depicted as a tanned muscular man in his early adulthood. He has bright red hair and narrow, narrow gold eyes. Atop his head rest two dog like ears, both red in color to match Tai's hair. Another notable feature is Tai's facial scars: one over his right eye, one on his left cheek, and one near his mouth on his right side. Later in Chronicles of Fenaur, Tai is shown to have numerous other scars on his body as well. Tai's outfit is fairly simple, consisting of a black, long-sleeved shirt, red pants, and red and black shoes.

Particularly compared to other members of the Fenaur Warriors, Tai is shown to be both grumpy and strict. While not overly cruel in his manner in casual situations, he demonstrates a clear expectation of others to be ready to handle a battle. Ultimately, however, this makes Tai seem both aloof and frightening, earning him few good impressions. Despite this, Tai also displays a sense of duty and responsibility towards his role as a leader, taking it upon himself to make sure Jamie is ready for the battles to come.

Tai is shown to be an excellent swordsmen, able to fell the first enemy we see easily. It can also be presumed he is skilled given it is Tai who offers to teach Jamie.

Tai is able to use and control fire, though this has not been seen as of yet within the comic.

Kopheru mentions that in their youth, Kai, Tai, and Kopheru were very close.

Tai is first seen in the comic walking behind Joah as Joah asks what they should do about the helldemon attacking new arrival Jamie. Taking no time at all, Tai eliminates the helldemon himself. With the danger out of the way, the Fenaur Warriors are introduced by Jamie, but as everyone talks Tai is disappointed to find Jamie might be difficult to train. Though he insists they train right away, the others convince him to allow Jamie to rest. Tai reluctantly agrees and everyone heads back to base.

Later on when the Fenaur Warriors are eating, Tai is with everyone looking somewhat bored. Against Ginley's insistence, Tai helps to explain to Jamie their mission, and how Jamie's connection to Fenaur makes her a target for their enemies. Jamie leaves overwhelmed by the situation, but Tai merely expresses that Jamie just needs to absorb the information.

A bit later, Tai is seen shirtless in his room when Jamie bursts in requesting that they train. Tai agrees they'll start in the morning, though he doesn't particularly look at Jamie much.

The next morning, Tai aggressively wakes Jamie up and then leaves to wait for her to get ready. Once Jamie arrives, he leads Jamie away from the base for a more open area to train. Though Jamie tries to ask him about the warriors that used to be around in the past, he callously brushes her off. As the training begins, Tai is disappointed to see that Jamie can barely hold a sword or even swing it. However, he perseveres and shows her, finding that she is at least picking things up quickly. Suddenly, though, a monster pops out of the sand to attack him and Jamie.

Tai has a tense relationship with Jamie. Despite factually understanding she's just a teen, Tai cares more about her being prepared than her emotional well-being. He is also avoidant of her questions often, preventing the two from really bonding at all. However, it can't be said he doesn't care, and that his attitude derives more from past experiences and the burden of leadership.

Tai and Kopheru seem to have a close relationship. Of the warriors, Kopheru seems to be the most understanding of Tai, and Ginley even describes Tai and Kopheru as love birds. Tai is also shown to be a bit protective of Kopheru, not seeming pleased by some of the attention Jamie gives to Kopheru.

Tai appears to have an amicable but combative relationship with Ginley. The two rarely agree, and Tai is rather dismissive about Ginley's worries regarding Jamie. However, Tai at least seems to not mind Ginley, nor has he shown to be cruel.

Tai and Joah seem to have an amicable, respectful relationship. Though not interacting much, the two seem to have a dynamic of leader and subordinate.

Tai and Leyza's relationship is somewhat unknown, though it can be presumed to be amicable given past history of being warriors together.

Tai presumably has a close relationship with Kai, though the two have yet to be seen together.

Tai has an unknown relationship with Kinna, though Tai seems to be familiar with Kinna enough to not be surprised with Kinna's vagueness.

Tai amongst the other warriors in their debut http://chronicles.fenauriverse.moe/comic/40 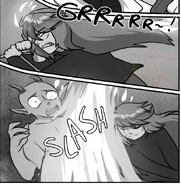 Tai being introduced by Ginley http://chronicles.fenauriverse.moe/comic/43 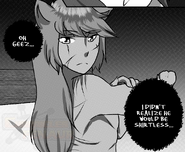