A rough medium-range tone, has a slight growl to it.

Joah is one of the main characters who appears in the Chronicles of Fenaur. He is a member of the Fenaur Warriors and the most chilled out of them.

Joah is depicted as a dusty skinned, muscular man. He has long, wavy black hair and black eyes. Hidden among his hair are two, black furred rat ears. Upon Joah's face are 4 scar like, black marks: two coming up from his jawline on either side and two coming down near the inner corner of his eyes. Joah is also shown to possess a rat tail and metal arms. Outfit wise, Joah wears no shirt, and instead wears simple black boots, brown pants, and a gray covering. He is also depicted with a cigarette in his mouth commonly.

Joah has a somewhat joking personality. He is shown to love teasing others, even when the target might not be the most comfortable with the attention. He is also shown to be a bit flirty, referring to Jamie as "babe" at one point. However, neither trait prevents him from being serious when danger is afoot and focusing on the job at hand, even if in a laid-back manner. He is also shown to have a bit of a big brother side as well (at least where Ginley is concerned).

Joah has shown to be able to control Earth to a degree, able to at least throw giant rocks at enemies.

Joah is first seen after Jamie arrives on Fenaur, throwing a rock at a helldemon trying to attack her. After asking Tai what they should do and scolding Ginley for not paying attention, Joah stands off to the side as Tai finishes the helldemon off. He proceeds to stand rather quietly off to the side as the others establish Kinna told Jamie very little, and eventually heads back to base with everyone else.

Joah is seen later sitting with everyone for dinner. As everyone explains to Jamie their mission of stopping Dezar, Joah takes a backseat and lets the others handle most of the explaining.

The next morning Joah is seen as Jamie is heading out to meet Tai for training. Joah proceeds to spook Jamie a bit by mentioning that Tai's training is rather harsh, and leaves Jamie confused as he departs laughing.

Joah has a bit of a tense relationship with Jamie. Although Joah shows no particular dislike for her, his personality causes him to tease her quite a bit. Ultimately this makes Jamie a bit uncomfortable around him.

Joah and Tai seem to have a semi-respectful relationship. Though possible with some expression of sarcasm, Joah refers to Tai as "captain." He also doesn't question Tai's training methods, showing a hint of trust there.

Joah and Kopheru have a somewhat unknown relationship. However, given they are both Fenaur Warriors it can be assumed they are somewhat close.

Joah and Ginley appear to have a warm, sibling like relationship. Unlike the others, Joah is willing to correct Ginley's behavior in a blunt but intently caring attitude. The two also show familiarity with each other as well, given that Ginley accepted the criticism and apologized.

Joah and Leyza have a somewhat unknown relationship. Though the two have not interacted much, it can be assumed they are decently close by nature of both being Fenaur Warriors.

Joah and Kinna have an unknown relationship, though it can be assumed that as a Fenaur Warrior he is familiar with her. 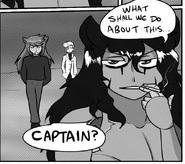 In the group when the warriors first show up http://chronicles.fenauriverse.moe/comic/40 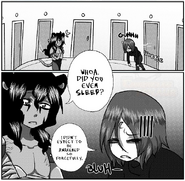 Joah finding Jamie on her day of training http://chronicles.fenauriverse.moe/comic/73

Joah after trying to scare Jamie http://chronicles.fenauriverse.moe/comic/74
Add a photo to this gallery
Retrieved from "https://fenauriverse.fandom.com/wiki/Joah_Rokkar?oldid=706"
Community content is available under CC-BY-SA unless otherwise noted.